Historical Background  - 1940 TO THE PRESENT DAY 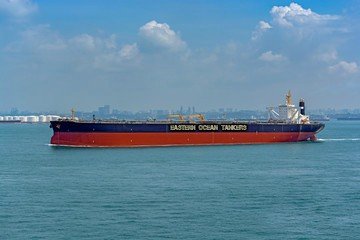 EOT  - Our history in shipping. From the beginning as The Hong Kong and Eastern Shipping Company Limited to the present as Eastern Ocean Tankers Limited

1940-1950
Scott and English Limited (Singapore company number 194000012K) established as a trading house in 1940 by Messrs John Galvin and Stanley Smith, identified the need for an inhouse shipping line to carry the company's own cargoes following the end of the second world war and on 6 March 1946 the Rymo Shipping Company, a shell company, was purchased. The newly acquired company (the Rymo Shipping Company) was renamed The Hong Kong and Eastern Shipping Company Limited (Hong Kong Company Number 0001826) or HESCO.

1960 - 1970
The Hong Kong and Eastern Shipping Company Limited (HESCO) under the direction of its parent company Scott and English Limited took the decision jointly invest in 2 second hand tankers together with Eastern Overseas Shipholdings Limited (E.O.S.L.) and a new joint venture company emerged on 31 December 1963 with the formation of company Eastern and Overseas Co. Ltd (Hong Kong Company Number F0000794) an entity designed to invest in ships and ship owning ventures, owned 50/50 by the two founding entities.

During this period three further joint venture companies were created in partnership with the Tasman Steamship Company of New Zealand. The first two entities were Southern Mercantile and Marine Corporation and Tasman Stevedoring and Agency Company Limited. The final and third entity, the Hong Kong and Eastern Shipping Company (Australia) Limited was formed to manage the joint entities and to act as agents. The companies were formed to purchase and charter vessels for the carriage of timber, the vessels purchased under the joint venture were the Viti, the Vasu and later the Madonna.

In 1964 a chartering agency was established in London under the name Cove and Beecham Limited (UK Company No: 00414641) to handle chartering enquiries and marine insurance matters from London.

In 1973 the decision was made to create Eastern International Investments Trust as an entity to raise funds for the acquisition of vessels. Each party contributed USD 1 million and the total amount of USD 2 million was used to raise a further USD 4 million from of Credit and Commerce International (BCCI) Bank. The general cargo vessel Eastern Venture was purchased first. It soon became clear that the wet (tanker) trades could be more lucrative and so two tankers were purchased from a Japanese shipowner and named MT Eastern Carrier and MV Eastern Caller.

In 1975 Eastern International Investments Trust arranged a finance package for the Swedish Salen Group. The package included finance for 4 newbuilding VLCCs in Japan, an option that was never exercised. During negotiations it was proposed that Salen Group charter one of their refrigerated cargo ships into EOSL (Eastern Overseas Shipping Lines) via their Singapore office. The MV Arawak of Sven Salén AB (Salen Shipping Company) was chartered to carry refrigerated cargo for the line and with this addition by 1976 the fleet stood at 6 vessels (the 3 owned vessels, the chartered in reefer MV Arawak and two tweendeckers chartered in from the London based Gulf Shipping Group to run a parcel service from PG Ports to Bay of Bengal ports. This was the start of close relationships for EOSL with both Gulf Group and the Salén Group.

In 1980 the two controlling parent companies decided that the company should focus solely on the tanker industry. Two new tankers of 12,000dwt were ordered from Japan and financed through Eastern International Investments Trust. The 70,000dwt tanker Sea Valiant was taken on a long charter to act as a floating storage (mother tanker) in the Bay of Bengal. The charter ran for 2 years and marked the entry of EOSL into the floating storage sector.

1980 - 1990
In 1980 the two new tankers of 12,000dwt were ordered from Japan and financed through Eastern International Investments Trust. The 70,000dwt tanker Sea Valiant was taken on a long charter to act as a floating storage (mother tanker) in the Bay of Bengal. The charter ran for 2 years and marked the entry of EOSL into the floating storage sector. Two older tankers were purchased and named Eastern Courage and Eastern Power.

In 1981 Eastern Courage and Eastern Power were sold at a small profit in order to release funds for completion of the two newbuilding's on order.

In 1984 the fleet consisted of the three older vessels, the two new built tankers and the chartered in floating storage ship Sea Valiant. The total dwt of the fleet had surpassed 100,000mts. Not a lot compared to big private owners but an achievement for a joint stock company founded by two non "traditional shipowning" companies.

In 1989 the older ships were disposed of. The fleet was reduced to the two remaining owned vessels and the occasional chartered in vessel.

1990 - 2000
In 1990 and up to 1996 two OBOs (Oil Bulk Ore) carriers were chartered in to run with crude to the Bay of Bengal and to Indonesia. The second vessel the "OBO Elif" was the first vessel under EOSL to exceed 100,000mts. Big for this small company but still small for Eastern Overseas Shipholdings Limited (E.O.S.L.) who had been financing VLCCs and ULCCs for thir dparty clients on lease financing contracts for considerable time. OBO Elif was later deployed into a new market shipping grain into Egypt and Pakistan where discharge was carried out using vacuvators. The tanks were then cleaned in preparation for a wet cargo to be loaded at the next port. This "operating" of non owned vessels gave profits of USD 4 million in 1996 a return that encouraged the founding partners to focus more on utilizing EOSL as an operator and less as an owning entity.

In 1996 plans were drawn up to move into operating full time. EOSL formed two subsidiaries, Eastern Ocean Tankers (EOT) of Hong Kong to act as operators of tankers on own cargoes and Eastern Overseas Shipping Lines (Agencies) Ltd to act as booking agents and managers for EOT.

In 1997 Eastern Overseas Shipholdings acquired a 50% stake in one modern Aframax tanker, MT Eastern Lion and two small lightering tankers followed on a BBHP (Bare Boat Hire Purchase) scheme. The aframax was deployed on a continous COA from the PG to the Bay of Bengal under a trade arrangement between PG based producers and Eastern Refining Co. The two lightering tankers provided discharge services. All booking and operating arrangements were handled by EOSL while EOT was the owning/operating arm.

In 1999 the aframax tanker Glory Central was chartered in to shuttle cargoes from the PG to Sri Lanka and Indonesia. This was an arrangement that lasted 2 years.

2000 - 2010
In 2002 the profits from operating vessels equated to USD 9 million by the year end. It as decided to offload the owned and part owned vessels and focus on diversification to create a group of companies. The small tankers were sold off quickly however the shareholding in the aframax tanker proved more difficult to dissolve. Eastern International Investments Trust used the proceeds of the sale of the tankers to embark on an expansion and diversification programme over the next 8 years. Starting out with the founding of Eastern Hotels and Resorts, Eastern Aviation Services and Eastern Oil Trading, the shipping side was also developed further with EOT chartering 12-15 ships per year to cover the traditional company trades while EOSL expanded the agency and shipbroking operations opening agency offices in Malaysia, Thailand, India, Bangladesh and the United Arab Emirates.

In 2011 the Dhaka arm of the group was refinanced in order to enter into the Bangladesh cabotage trade. The company was marketed as a new entrant into the domestic shipping arena. With guarantee's the parent company in place the "new entrant" secured finance from local banks to fund the purchase of two Aframax Tankers. Eastern Ocean Tankers bought the 98,500-dwt Fly Eagle (built 1992) for USD 10m and the 93,700-dwt Milkyway (built 1991) USD 9m. Fly Eagle kept her name as she was fixed on a long charter to Eagle Oil Co. while Milky Way was renamed Eastern Force. MT Eastern Lion was finally sold for demolition via EOSL and their panel broker Scandocean AB who handled the negotiation as brokers.

Also in 2012 STS Shipping and Trading Co Ltd became Eastern Overseas Shipping Lines (UK) Limited to act as chartering and financing agents for Eastern Ocean Tankers and for Eastern Energy. Later in 2012 Eastern Ocean Tankers announced its intention to purchase two 45,000-dwt products tankers of around 15 years old, funds of USD 30 million were raised via the London office (EOSL) in preparation for this expansion with the vessels to be used for domestic customers for long-term contracts arranged via the Dhaka office.

In 2013 political tension in the region resulted in the shareholders agreeing to shelve the prior announced plan to purchase two 45,000-dwt products tankers of around 15 years old as the contracts for local customers appeared to be on unsound footing. Instead the founding partners decided to spin off Eastern Ocean Tankers and its subsidiaries into a stand alone entity with the idea for a possible flotation in 5 years time.

Eastern Ocean Tankers became a HK and Labuan company while Eastern Energy Services and STS Shipping and Trading were merged with Eastern Overseas Shipping to create a single managing entity for all shipping and trading activities, effectively creating a single parent company in EOT as the principal and a managing arm in EOSL as the managing agents with offices in London, Singapore, Hong Kong, Chittagong, Dhaka and with representation in Port Harcourt and Lagos via a joint venture with Ocean Marine Tankers, itself owning 2 tankers of 45,000dwt namely MT Abiola and MT Igbinosa. As part of the planned move towards preparation for an IPO in 2013 the company announced its interest to build 4 x MR (Medium Range) product tankers for use in the international market. Eastern Overseas Shipping Lines (EOSL) also arranged funds for investment in two feeder container ships. The directors held meetings in both the UK and the USA to discuss and plan for a potential listing.

In 2014 as Eastern Ocean Tankers (EOT) and its managing subsidiary (managing agents) Eastern Overseas Shipping Lines (EOSL) progressed with plans for a listing oil began a dramatic fall from a peak of $115 per barrel in June 2014 to under $35 at the end of February 2016. The company needed to take drastic action to secure its future. The joint venture in West Africa was dissolved as the ships purchased were specifically for the West African market which was at a stand still, this resulted in a write off of USD 20 million. The aframax tankers were scrapped and the order for 4 new MRs was cancelled. The losses were substantial however the company did make a profit on its operating activities thanks to the low cost of chartering in tonnage for the traditional in-house trades. EOT also chartered 2 tankers on 2 year contracts for floating storage. By the end of 2016 Eastern Ocean tankers had transformed from as asset backed owner to a tanker operator.

In 2016 the operations of the various subsidiaries were merged and sold off in a package financed by Eastern Overseas Shipholdings who arranged a credit facility for the buying consortium. EOSL was closed and the company allocated all its chartering to its long standing "panel brokers" namely Scandocean SA a shipbroking company based in Sweden that had diverged itself from the old Sven Salén AB (Salen Shipping Company) and was headed by Mr Bo Pernemar a former director of Frontline who had assisted with the chartering of vessels since 2002 and Alumni Shipping and Trading headed by Capt Eric Sims, a former director of Anglo Oil Co.

By 2020 Eastern Ocean Tankers (EOT) chartered its 70th vessel since turning to operating and managing tankers from third parties. .The company divested itself of a lot of older assets during the crisis set about by the fall in oil prices but announced its intention to return to investing in assets in 2021.

2021 - to date
Eastern Ocean Tankers (EOT) chartered its 75th vessel since turning to operating and managing tankers and with an eye to future has started to work on a new growth strategy. Watch this space.